“My reason for farming is my need to become part of the place I live. I cultivate it – it nurtures me. I use a Belgian draft horse, Samantha, for much of my farm work. Farming with a horse forces you to slow down, to be present in the here and now, to feel the pulse of the earth. Samantha is part of this rhythm. I become more connected to this land and discover more about myself through working with her.”

From “In praise of Island Stewards” 2002, Joel Sackett

Samantha, my good friend, farming partner and Belgian draft horse died Saturday night, September 25 at 8:40. Farm apprentice, Becky, and I were at her side as she let out her final death rattles, slumped to the ground and left this world. What we thought might have been colic, a serious stomach problem for a horse, might have been her body breaking down. She was 27 years old (that’s pretty old in the horse world), was having a hard time keeping on weight, as well as getting up and down. Only 4 weeks before she developed a “choke” where food was lodged in her throat. I thought she was dying at that time. With the help of a vet her throat opened up again, but that event started preparing me for what would eventually come.  She worked almost to the end, her last job the week before, disking and sowing cover crops. 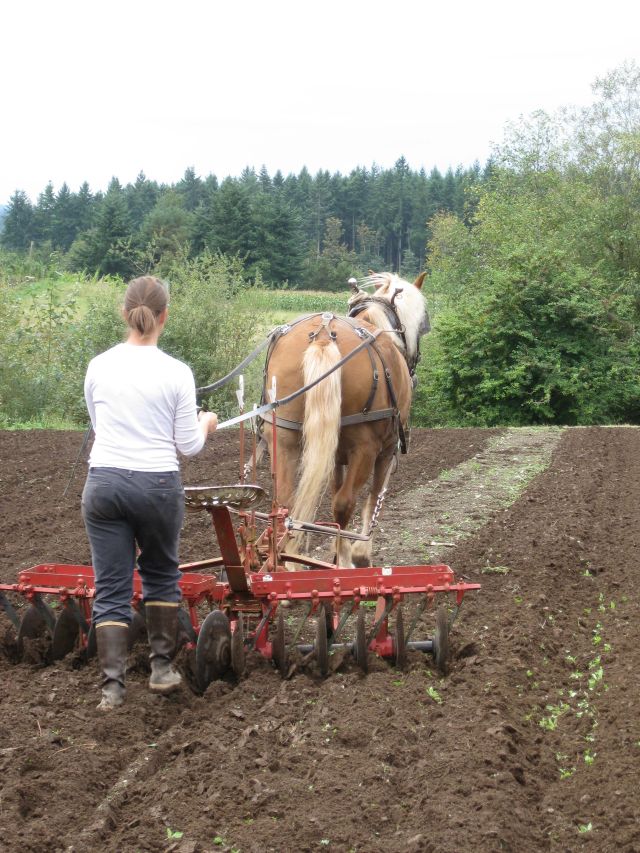 Actually, I probably started preparing for this a year ago by asking horse friends to keep their eyes open for a team. That process finally led me to purchasing 2 young Suffolk horses who are just finishing some training with John Erskine in Sequim.  John’s had a lot of horses in his life so a few months ago I asked him for advise on what to do when a horse dies.  “Tie them up like a turkey, making them as small a package as possible. You don’t have to dig as big of a hole.” Then there was the question of how do you move something that can weigh over 1700 pounds but can no longer use it’s own 4 feet. More words of advice: “put a rope or chain around their neck and use that to pull them.” Yes, sounds gruesome, but these were valuable words that enabled me to deal with the after death situation. Tractor and backhoe sped up the process. Several friends came by to help move her and dig the grave by flashlight and moonlight.

Sam returns to the earth

We buried her near a white oak tree that I had planted a few years back – my favorite tree species because of the grace and strength they develop with age. I surrounded her carrots, cabbage, corn (some of her favorite foods), a small grape vine wreath to represent how she came to me thru the Bentryn’s vineyard & winery, a picture of her and I on a wagon train to represent how much she taught me and fun she brought into my life, another picture of her at Christmas dressed as Rudolph with one of my favorite farmers’ market customers representing all the joy she brought into others lives, and my favorite rock as the part of me that continues with her. 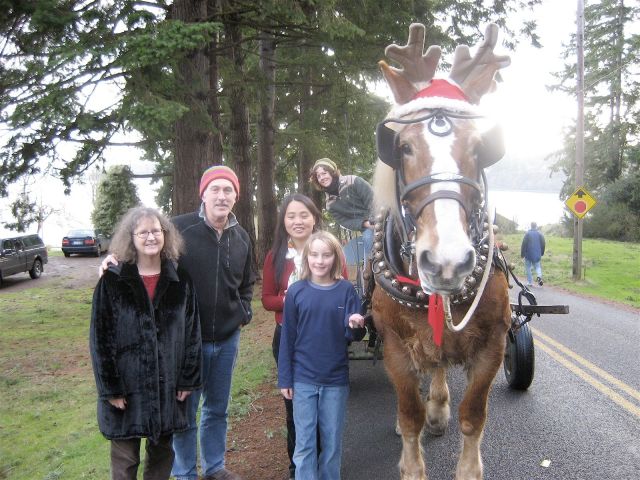 Sam was part of my life for almost 20 years. She was purchased by Bainbridge Vineyards (where I also work) as an alternative to using diesel tractors. As they say “every solution creates it’s own set of problems” and so it was with this one. We didn’t have the right equipment, we knew almost nothing about horses and this particular horse liked to eat grape leaves! My early lessons were sometimes learned the hard way – via runaways! One particularly fast vineyard cultivating session ended with a dozen grape vines and several posts being ripped out. After I was able to catch up with the horse and the broken pieces I thought I should have a special commemorative bottling of “Runaway White Wine”. Several other runaways followed, but luckily I only hurt my pride and my pocketbook!

It was time to get some serious help or get out of horses. I found that help from 3 people who became my draft horse mentors: Tom Pehrson, John Erskine and Bulldog Fraser. I could go on for a long time about how each of these guys have helped me to connect better with draft horses, but for now I’ll just say that I am extremely grateful for all the advise they gave. While it didn’t work out to use Sam in the vineyard, horse farming fit well with my vegetable farm (possibly because the leaves were further away from her mouth!) Over the years, Sam and I got to the point that we did most of the cultivating together. We still weren’t very good at plowing, in no small part do to my big plow (that really needed 2 horses to pull it) and my inexperience. Over the last few years she gave my farm apprentices their first chance at driving a horse and not one has had a runaway! 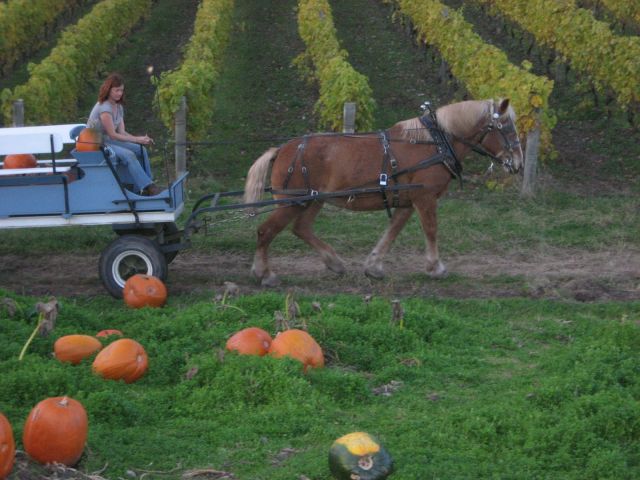 Besides her help on the farm, Sam opened up a gateway to much fun and adventure for me including wagon trains, Sunday rides (I called it the Fair Weather Horse Drawn Church of the Open Road as we drove to Bay Hay for coffee while singing songs – our own version of religion), hauling trees and pumpkins, and caroling from the wagon on Christmas morning in pajamas. 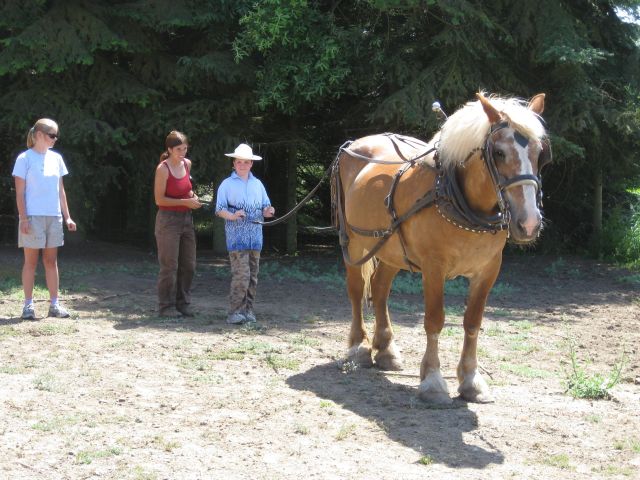 She delighted many school children when she pulled them in a sled or wagon around the farm. Some lucky ones even got to drive her themselves. One story stands out for me – little girl from N. Kitsap who came with her class to experience pioneer skills. She had muscular dystrophy and spent most of the trip in a wheel chair. When she saw the other children driving the horse, she was bond and determined to do so as well. She stumbled a few time but did it! Sam always seemed to like having kids around, I think because most of the time she didn’t have to do any work – just stand and get petted.   “Thanks you” cards from classes always included numerous drawings of her, the ones drawn by boys often showing her pooping!

Although good-natured, Sam wasn’t one to hang out with people. I always had to laugh watching folks try to coax her to the fence with some kind of treat. A little bit of a princess, you’d have to take it to her. Then, maybe she’d eat it, if the apple was crisp enough, if the carrot wasn’t old! She likely was the most photographed and written about horse on the island, with many appearances in newspapers, the book “Earth Knows My Name” and two of a local photographer’s, Joel Sackett, books. In fact, the night before she died, Joel was here photographing her in the moonlight for a show he is preparing. I feel fortunate to have been with her during her passage with the moon once again shining. I will miss her.

The garlic scapes are coming on strong in the garlic patch right now!  Scapes are the stem-like flower stalk of the garlic plant, and they are delicious raw or cooked.  Chop them up raw for a salad topper or sautee them in olive oil until they brown slightly and serve over pasta.

Hi!  This post is by Becky, I’m one of the farm interns this year.

Last week we got to take a break from weeding vegetables here on the farm and took a trip to Sequim to visit John Erskine, Betsey’s horse mentor.  He has been working with draft horses for a long time and has been training Betsey’s two young fillies.  It was pouring down rain the day we were there but we had a great time cleaning harness, learning about horsedrawn farm equipment, trimming the horses’ feet, and finally, each getting a turn to drive a team of two horses!

When we were in Sequim we also visited the Dungeness Valley Creamery and got some delicious raw Jersey milk from this family-owned dairy.

Now we are back at Laughing Crow Farm, trying to figure out what we can get done in this rainy June weather!

Renee visiting with a pair of horses 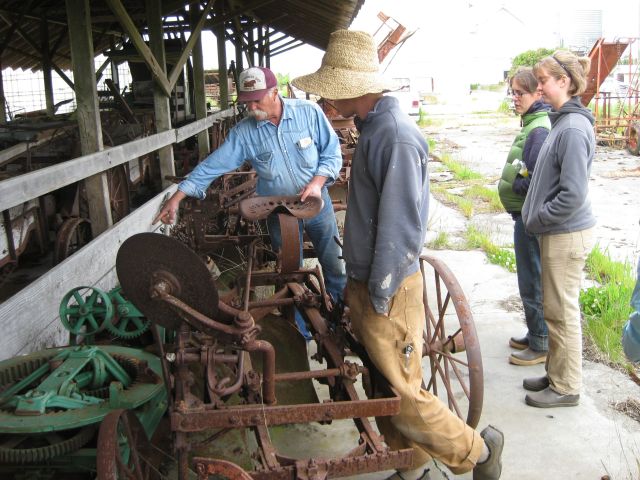 John showing us some implements

All of us on the wagon

Red returned from Pony Boot Camp (run by John Erskine of Sequim) and now her sister, Abby, is stuck up there learning to drive. don’t think she is too happy about it – doesn’t have her sister to hid behind any more! Red is now joining Samantha, my 26 year old Belgian, in taking on some farm work in between practice runs pulling the tire around the farm.

Check back for updates to our lovely blog.